"A shit-ton of assassin ass."

"Van Meach, the lovable mutant of a government project called Interman, is on a mission to find out where he came from while simultaneously kicking a shit-ton of assassin ass. Parker's crisp, detailed scenery sucks you into a world of government cover-ups and an international quest to find answers to a cold war project gone awry."

Jeff Parker's The Interman reviewed in the Portland Mercury as part of their Stumptown coverage.

Speaking of Stumptown- It's tomorrow! Damn! There's going to be a whole lot of cartoonist talent in one room, and if you're within driving distance, you owe it to yourself to come by and take a look. Mercury will be represented by Parker, Paul Guinan and me, Steve Lieber, and probably one or two other maniac talents. I'm excited about finally getting to pick up a copy of the latest issue of Colleen Coover's Banana Sunday

"...take a fine wire, stick it in their heart, and burn a hole in it with extreme cold, a process called cryo-damage which mimics the damage of a myocardial infarction, and in the MRL mouse, heart tissue regenerates."

And this is good and right: Pete Woods is exclusive!

Run to your local indy-friendly store.

We've all been watching for this one carefully, and we couldn't be more excited about its arrival. Looks like the industry agrees, too, as it was one of the buzz books of SPX this year, and sold out long before the end of the show. Here's what Variety's Comics Blog says about it:

"If there wasn’t a niche in the graphic novel world for a writer who can make real-life science into page-turning entertainment before Jim Ottaviani, then we can all be thankful he’s created it for himself.... This also is a very sharp looking book, with a fantastic cover by “Xenozoic Tales” creator Mark Schultz and art by Big Time Attic, which includes Zander Cannon, Shad Petowsky and Kevin Cannon, that’s clear, compelling and beautiful."

If you scroll down, the same entry has this to say about Flytrap:

"the book does such a good job of conveying her character in a mere 16 pages, that it would be a shame if we didn’t get to see more of her, whether it’s self-published by Ryan and Leiber or some smart publisher decides to pick it up. As a note, the book is not available in stores so you have to go to Leiber's web site or find them at a convention to pick this up. It’s worth it. Grade: A"

Well, they spelled my name wrong, but got the link right. The important thing is that it's a damn fine name. Ask the man who owns one: The Jewish Journal of Greater L.A. reports that Stan Lee "despises" his assumed name and prefers "Lieber."

Over on The Engine, our friends Leland Purvis and Elizabeth Genco have announced a challenge for themselves they call The Pact. 60 pages in 90 days. We'll be watching, guys.

Also on The Engine:

"...this guy, though dead, would not stop flopping around. For a full what seemed like two minutes, he laid there and twitched and frowned over and over again."

From "How taking pictures can get you into trouble"

That's all for today. I'm done with you.

NOTE TO FELLOW STUDIO MEMBERS: Hey guys, I'm the one who walked out with the Orion Bathroom Key in my pocket. You'll just have to make do with the Snake Plisken one until I get in around 2:00 today. Sorry.--Parker

I wonder if Marvel will work this into the publicity for Omega the Unknown? Jonathan Lethem named a Macarthur Genius Fellow

Speaking of genius, when the Macarthur people get around to recognizing minicomics, Sean Bieri better be at the head of the line. Seanrecently posted some good news at Sequential Tart.

I'd love to show you some art from the issue of Gotham Central I'm working on, but I can't, so here's a page from the last one: 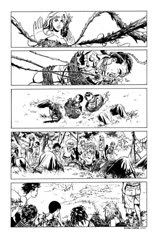 Cool! The men of Big Time Attic in Minneapolis threw a party to celebrate the release of Bone Sharps and Thunder Lizards. Photos at the link.

I suspect our Studio listening will never be the same again: Fountains of Wayne Hotline. Via Henley.

I just want to let the good readers of the Mercury Blog know that I am going to attempt to post a page a day (starting yesterday) from my sketchbook on my blog at Stop Saying "Amazing"!

I will attempt to do this from now until the end of time, but I'm sure I'll miss a day here and there. I contribute to my sketchbook almost daily and I should do the same with my blog, so hopefully this will help me keep on task. So when you are done here, click over to me.

Steve here. You know, I can't believe Parker made it throughbeverage week without paying tribute to this American Classic. Oh man, I could drink me down a couple of cold ones right now.

Two more great reviews of Flytrap.The Comic Queen starts her review with something I need to work harder on. "I honestly have yet to figure out why Lieber and Ryan don’t get more attention for their work." And Randy at The Fourth Rail says that "Flytrap is a minicomic, but it's a professional product, and I'd go so far as to call it must-reading for those who want more than superheroes out of their comic book medium."

The comment thread after the Newsarama interview deceneded into lunacy, and seems to have left Matt Brady curled up in the corner making little "nuuhh" noises. I think it's open to vandalism at this point, in case anyone wants to go there and post their own close-ups of a monkey eye. I'll try to find a good one, or if anyone has the energy to work in a plug for Colleen Coover's delightful Banana Sunday, that could be fun, too.

Sara and I spent some quality time with the progenitor cells of Portland's rapidly metastasizing webcomics scene: Jenn Manley-Lee, Bill Mudron and Dylan Meconis all gathered to celebrate the mumblety-mumpth birthday of Kip Manley. I'll note here that Bill Mudron desperately needs to keep a notebook with him, because he casually tossed out several screamingly funny ideas that need to be put out there for the world to appreciate and reward. But no one had a pen, and I'm sure Bill's already forgotten them, so they're lost forever, and the world is a less funny place.

David Hahn here. I've been asked by a lot of people what my home studio set up is like. Okay, just one guy asked, but I thought it would be fun to post pictures of my home workspace. I'm hoping my studio mates will do the same, even if they just sit on the couch with the lapboard, let's see it! I think it's cool to see what our personal environments look like when we do what we do: Draw guys hitting each other.

These pictures make my space look larger than it really is. There is just enough room to draw or kick back and watch tv or play Playstation, both of which usually involve watching guys hit each other. 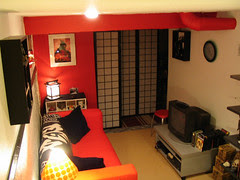 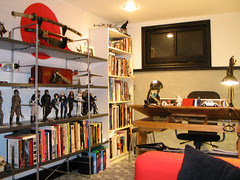 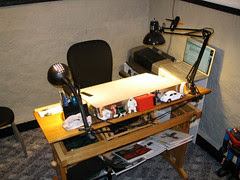 "Sara's a novelist. She's used to autonomy when telling a story. 95% of my work has been collaborations. So of course she's flexible and easy to work with while I'm a total prima donna."


That's Lieber, telling us what we already knew. He and Sara talking to Newsarama about their project, FLYTRAP. They all say the word "batch" a lot, and for some reason take an extended moment to smack Sean Bieri around for no reason. A good interview, but I don't know how anyone's supposed to get this book. I guess you can, like, order it or something. –parker

But Enough About You...

here's what I'm doing:
I've written an X-Men Unlimited story for issue # 11, due out next month. I received the pencils and some of the colored pages. Suh-weet. David Aja is the artist and his stuff is fabulous, reminds me of Karre Andrews's work. That's the New Mutants, Sunspot and Cannonball, hanging out there. 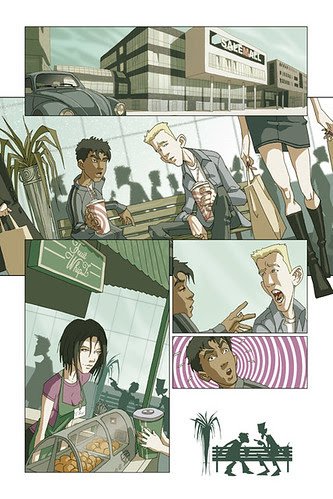 Also, I drew the cover (in Adoble Illustrator, 6 hours) to an upcoming book called Chick Flicks and Party Tips: A Guide to a Girls' Night In, published by Collector's Press. I think it came out swell, as I've been wanting to draw in the euro-fashion style for some time. 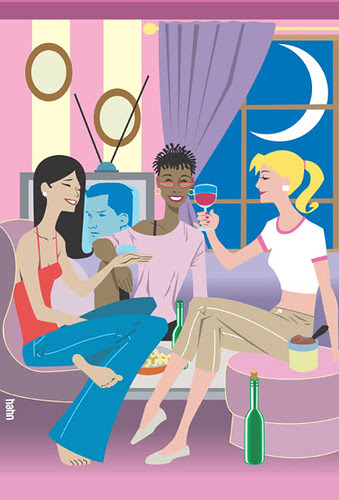 And the Statesman Journal has a review of it right here. Thank goodness we have Mike Jozic to find this stuff for us since Paul won't pass it on.

Jeff Parker here--I'm repeating my post from Mystifying Oracleof what I'm auctioning this week for Gulf Coast flood victims. Please spread this around if you're a blogger or message boarder, more of Mercury Studio will be putting up art when they get in this week.

My story in Dark Horse's THE ESCAPIST is coming out soon, and I'm going to use some pages from that for any Katrina Relief auctioning. What I'll do is put up the pages here and you can bid in the Comments section or by email to me, and after a week I'll declare that winner, and give the person a studio address to mail a check made out to the American Red Cross which I'll send on as I send out the page. I may be putting up a page also in other places like the Bendis Board Auction to see where I'm getting to the people who want to donate this way. Also go check out Mike Wieringo's BLACK CAT piece on eBay that he's donating proceeds from, which hopefully they won't take down.
UPDATE: They took Mike's piece down. Check in over at his blog to see where it goes up next.

Here's what the actual page looks like, below, from my story, "The Escapist at the Royal Festival of Magic."

"Your old stuff was better" is a horrible thing for any artist to hear. Speaking as a reader and a cartoonist, though, there are times when I've thought it myself. Not every artist gets better throughout their career. Some change, and some lose that special something, even as they improve as technicians. One example that comes to mind is
Lou Fine. I've heard both Joe Kubert and Gil Kane remark that Fine's work got slicker and more photographic over time, but that it lost the magic, the spark that made them love it in the first place. I can see what they mean:
Early:

I thought this was worth highlighting. In a post below, I mentioned that Mark Fossen noticed a lettering technique Sara Ryan had me use in Flytrap. In the comments thread Augie responded:

"I did notice what he mentions about your lettering. It's not exactly a new invention, but it is the kind of thing that's used very sparingly today. It's not in the Comicraft How To Letter book, which makes it an Advanced Lesson that only "veterans" can teach."

We're talking about these sorts of things: 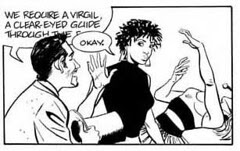 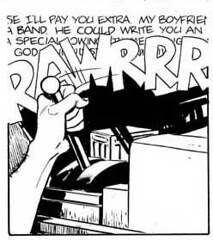 I'm surprised at how infrequently basic storytelling tools like these are used. Sounds cut off other sounds all the time. We interrupt each other. Loud noises drown out speech. People go on when we're no longer listening. There are very simple ways to graphically represent these phenomena in ways that are instantly understandable. Eisner and Kurtzman used them. Chaykin used them. They probably go back to Winsor McCay.

Damn, he can draw. 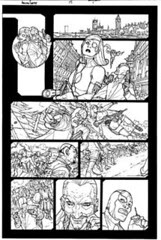 Pete Woods has put up some new art at his livejournal.

New blogger Mark Fossen shares his thoughts on two comics of mine. He even notices stuff about the lettering that I thought only Augie would spot. And Steven Grant has some fine things to say about Heartbreakers meet Boilerplate. And here's a photo of Wonder Woman and Fantastic Four artist Drew Johnson rehearsing for his eventual move to Los Angeles. We miss him. 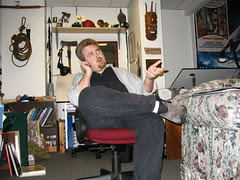 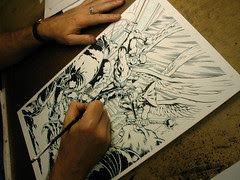