It's not all just blood and police tape around here. Why, if you go over to Newsarama, you can read about other things Mercury members are up to. Like say, an interview with Terry Dodson and what all he's doing at DC. And sometimes our members work together on things, like Karl Kesel and David Hahn over at Marvel. It's so much more than stepping over gunshot drug dealers, it really is.

True story: we were working in the studio a little after four this afternoon, when we heard three bangs- POWPOWPOW. No mistaking it, that was gunfire.

Ron, Paul, Terri, and I ran down the stairs to investigate. There were a couple of young guys in our doorway. One was in a sleeveless t-shirt with his pants half down, prodding at a bullet wound in his thigh. Lots of blood everywhere. We're downtown, so the cops and paramedics arrived quickly. The victim repeatedly refused to answer any questions about his shooter and climbed onto the stretcher under his own power. The cops taped the scene off.

Our landlord was right there with a new potential tenant he'd been showing around the building. The landlord put on his gamest smile, turned to the guy and said "You see how fast the police got here?"

David here. Bite Club Vampire Crime Unit #1 is in stores today. Here's a pic of the cool Frank Quitely cover, so drool now and get it done with. Love it. Love it! Love it all you want. Okay, you done loving the cover? Well, love it some more. You done now?! Okay, good, now let's move on because BEHIND that cover is a great story by Chaykin and Tischman, and eye-pleasing storytelling interior art by me, with colors by Brian Miller. There. 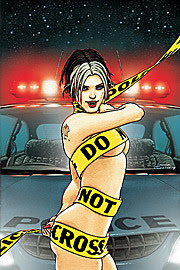 And "celebrate the graphic novel" with Steve and studio-friends Colleen Coover and Root Nibot, and Oni Press publisher James Lucas Jones. I think there's going to be cookies and lapdancing. Wait, no, I made some of that up. Colleen and Root will be talking about their wonderful Banana Sunday comics (starring monkeys! Who doesn't love a good little monkey). Steve will be talking about creating comics, and signing The Complete Idiot's Guide to Graphic Novels. James Lucas Jones will be doing the lapdancing.

(This is Terri, by the way. Steve is not writing about himself in the third person. For once.)

Congrats to Paul Guinan who was nominated for an Eisner Award in the Best painter/multimedia category for Heartbreakers Meet Boilerplate. Yay, Paul! The "mutimedia" in that nomination refers to Paul's unique Paintography technique. Ask him about it sometime. 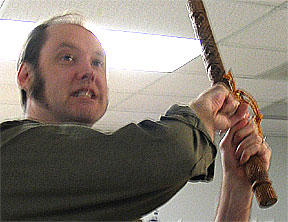