I had the seed of a story about two people whose budding friendship is interrupted by catastrophe scribbled in the margins of my sketchbook for about a year. It was then that Shelly Bond at DC/Vertigo asked me to pitch something for the Minx line back in February ‘06. At that time everything about Minx was top secret, so naturally I had never heard of the imprint.

Over on another message board, there's a discussion of stories that hit hard again and again. Here's my list of five that have never lost their impact for me.

Lee and Ditko's Spider-man #33 The opening of the last chapter of the "Master Planner" storyline, with the big machine-lifting opening sequence.

Gilbert Hernandez's Human Diastrophism and Poison River The former with its remarkable resolution of Tonatzin's story, the later for the heartbreaking sequence involving Ofelia's shaking her fist at baby Luba.

Charles Burns' Black Hole. I don't know how many times I've reread the "Windopane" chapter where we meet the woman with a tail.

Lynda Barry's story The Most Obvious Question got a lot of its impact from the juxtaposition of her fun, spazzy, A.D.D.-ish doodle-drawing style and the closely-observed, grim reality of the material.

So that's my five. Which stories do it for you?

In 1998, novelist Greg Rucka debuted on the comics scene with the four issue mini-series “Whiteout” from Oni Press. With artist Steve Lieber handling the visuals, the series which followed U.S. Marshall Carrie Stetko investigating a murder at the McMurdo Station in Antarctica, was an instant hit, garnering four Eisner Nominations. Not content to rest on their laurels, the duo revisited the life of Carrie in this rather harsh environment two years later with “Whiteout: Melt” in which the tough as nails Marshall is called back to Antarctica to investigate the explosion of a Russian science depot. Things got worse from there for Carrie, as she soon discovered an illicit cache of nuclear warheads and evidence that some were missing. This series likewise was an Eisner, but this it took home the trophy for Best Limited Series.

Since then, little has been heard from Carrie, but that all changes in the fourth quarter of 2007 as Rucka and Lieber reunite for the third chapter of Carrie’s story, “Whiteout: Thaw,” once again from Oni Press. Like the two previous series, “Thaw” will likely debut as a four issue mini-series (Rucka, Lieber and company are still finalizing their plans) in black and white once again.

CBR News caught up with Rucka and Lieber to learn more about what they have in store for Carrie, how this series has evolved since the original two books were published, and why the long delay between “Melt” and “Thaw.”

Read it all, free!

The second episode of FLYTRAP is now online. This one's called "Deep, too." It's illustrated by our own Ron Chan, who recently completed "A Dummy's Guide to Danger" from Viper.

You can also read (or re-read) the entire first episode of Flytrap, here. 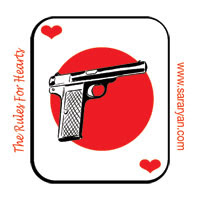 Sara Ryan has released the second of the seven icons designed by Colleen Coover to illustrate Sara's new novel The Rules for Hearts. Sara's website has instructions for how to get a free set of vinyl stickers of all seven icons.

The word comes down from Manitoba:

"Everyone in town here is getting flyers in the mail that ask for extras. They're looking for 'people who look like scientists that have been working in harsh, cold weather for a long period of time'. Which means I can't be one, since I stay inside most of the time and don't have the wind burnt face. Plus they ask for flexible hours between March 5th-18th, and I can't take days off of work to go. Oh well. I'll just keep selling them insane amounts of canned soups and orange juice."

Jeff Parker and I were taking yesterday about good advice we've been given, and after a few minutes, both of us came to the conclusion that the best we ever heard came from Dwayne McDuffie. Here it is.

Not long after The Interman came out I was at the excellent Earth 2 Comics in Sherman Oaks, which is very close to the Warner Animation offices where Dwayne worked. Jud and Carr of Earth 2 were putting on a little party for the store and other creators were there. I had never met Dwayne, but he seems to keep tabs on everyone in comics, and gave me some great advice. Speaking about my promoting of Interman and that I was about to do more work for DC (at the time, Jon Lewis and I were supposed to be starting a book for the ill-fated FOCUS line). I'm screwing up/paraphrasing, but essentially McDuffie the Sage said: "You're pretty good at promoting your stuff. Don't stop doing it when you're working for DC or Marvel. They'll tell you not to, that they want to handle all that, but go ahead and do it anyway. It'll just help you, and they won't do anything about it."

It's really some of the best advice a creator has given me, and I follow it.

I was sitting next to Dwayne at a con, and the conversation had moved from comics to the general matters of taking care of yourself. Dwayne noted that over the past few years, he'd dropped an extraordinary number of pounds. I asked him how, expecting an elaborate story. Instead, he just gave me a level look and said "Steve, I quit eating bullshit."

There's lots more good stuff over at his forum.

What about a panda?

So I took a look at the latest development in the latest funnybook pissing match, wondering if there's one party that's obviously in the wrong. "It all seems so pointless," I thought, "but nothing's black and white."

Then I remembered this, from an interview with David Mamet:

Is there a moment in one of your plays that you really didn’t know was there?

The Rules for the Sara/Colleen sticker giveaway.

Novelist/comics writer Sara Ryan has a new book coming out. On her blog, she writes:

Courtesy of the lovely and talented Colleen Coover, here's the first of seven icons based on different elements of The Rules for Hearts. I'll release one a week, each with a quote from the book, until the beginning of April. Feel free to use them wherever you'd like! And if you put them somewhere on your blog, MySpace, journal, etc., I'd love it if you posted the address in the comments!

and I will send you a sticker!

BONUS: I will enter everyone who gets stickers into a drawing for a signed copy of Rules.

From my uniquely privileged position, I've had a sneak peek at all seven, and they're great. I expect to see the online versions popping up on ljs everywhere.

Doritos and Feet
So, we've had this vexing question that's annoyed and puzzled us for years. Yesterday, we decided to take action and see if there's an answer. We wrote a letter to the customer service manager of Alvin & Company.

Hi. First, I should note that I realize this might sound like a prank question, but honestly, it isn't.

I'm part of a studio of comic book artists and we all use Alvin ellipse templates. We all bought them at different times, from different retailers, but they *all* have the same cheesey mildew smell, even the set that someone just bought this week.

It's finally sunk in that we might be able to do something about this. Before we risk ruining an expensive set of templates by washing them in a bleach solution, we were hoping you'd have a suggestion. Is there a recommended way to clean them (and the clear plastic envelopes they came in) that would get rid of that unpleasant smell?

And no, this wasn't a prank. The templates are great. They're lightweight, strong, and well-marked, but they smell like a bowl of doritos and feet. So anyway, the reply came today.

We know this is not a prank question.

Unfortunately this is a line of product that we have this issue with.

We do not recommend a bleach solution. They can be washed with a mild soap to clean them, but that may not do anything for the smell. The only remedy for the smell is time. Eventually the smell should subside.

So that's that. The only solution is time.

Warner Bros. will distribute the pic, based on Greg Rucka's 1999 comicbook miniseries of the same name. Scribes Jon and Erich Hoeber are adapting for the bigscreen.

Dark Castle Prods., a unit launched last fall within Warners-based Silver Pictures, is backed by more than $240 million from 15 different investment firms. Coin will be used to finance 15 pics over the next six years, with Warners distribbing the entire slate.

Silver has sole greenlight authority under the terms of the deal. He also has full creative control. Film budgets are expected to be in the $15 million-$40 million range.

"Whiteout" is set to begin lensing March 5 in Montreal.

I'd like to say I'm starting to believe this might actually happen, but my brain doesn't work that way. Truth is, I won't fully believe any of this is real until I see the DVDs on the blowout rack at Blockbuster.

Jeff Parker continues to bask in the admiration of people who think the comics medium can delever "entertainment."

Meeting David Hahn
Just found this. It's a bloggers con storystory of how he met the artist of Bite Club and Private Beach.

Dylan Meconis has posted page 49 of her ongoing serial Family Man, which means, she notes, that "the comic has officially covered 24 hours in the life of the unusual and imperfect Levy family. Phew." Go Dylan! 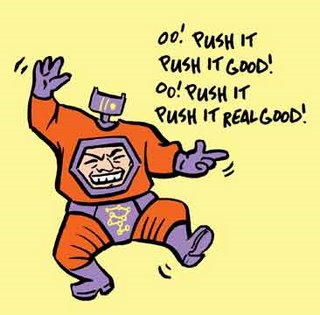 Colleen's going to be at the Beasts signing Friday the 2nd at 7:00 pm at the Grass Hut on Burnside.