San Diego Comic Con Report, part one of whatever.

I'd missed Comic-con last year, when things really exploded, and to tell the truth, it felt great to relax and take the time for myself. I won't get to do that this year, so I have resolved to take it easy and not work myself into a nervous frenzy before the show. I don't print a bunch of posters or spend any time sorting through original art the day before the show. In fact I don't even think about packing until after midnight the evening before flying out. Then I check my ticket and realized I need to get up at 5:00 AM. Oh Christ. I run around the house in, well, in a nervous frenzy and scramble to get things in suitcases. Get to bed at 3:30, sleep an hour and a half, and wake Sara, who gives me a patient sort of smile-grunt, then drives me to the airport.

First meeting of the show is with Sean Stewart. We'd spoken some on the phone a few times this year but haven't had any time to catch up and actually talk. The guy's a mensch. I think he's actually younger than me, but he's who I want to be when I grow up. We meet at Cafe Noir, and the guy who owns the place intuits we're there for Comicon and breaks into our discussion. "Listen, I hate to interrupt, but I should tell you that this isn't just a coffee house, we also hold the world's largest collection of private eye memorabilia. It's my collection, and if you want to bring some comicon folks by later on, I can arrange a showing. I've even got a number of pieces from the J. J. Armes collection. You know Stan Lee's developing him as a superhero." I have no idea what to make of this but Sean's impressed. He tells me about Armes, a private eye who'd had his hands blown off and did all sorts of cool adventure things with replaceable custom hooks.
"So he's like a Swiss-army detective?"
"Kinda, yeah. He once hung in an elevator shaft for hours. Hooks don't get tired."
"Jeez." 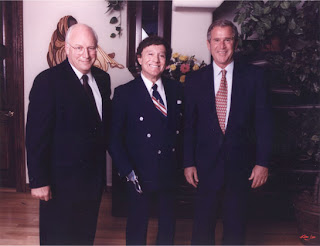 Sean and I meet a collaborator of his at a Turkish kebab joint. They need to get somewhere soon, and I act like a well-travelled local guide. Translation: After fifteen years of Comicon, I sort of know which direction to walk to find the Hyatt. I guess there have to be a few advantages to doing this to myself year after year.

But maybe those advantages are real. When I get to the convention center, I try to get in line to get my pro/exhibitor badges, which wouldn't be a challenge except that the various lines have gotten tangled and I can't even tell which one I'm supposed to be in. I recognize the beginnings of an ugly 45 minute tangle and try to sort out who is going where, when a staffer waves me over and sneaks me my pro-pack. "Did I just get away with something? It feels great."

On my way onto the floor, I run into Jim Ottaviani and Carla Speed McNeil. In a better life I'd see them twice a week instead of twice a year. I can't begin to say how much it means to just hang out with old friends for a few minutes, and I want to just grab them both by the arms and drag them away from the con. Just pull them away and away and take them somewhere quiet to talk, holding tight as if my hands could never tire, and ask a million questions and find out everything there is to know about their lives. I won't of course, even with dinners and time after the show, the talk will be jokes, and rumors, and what's the latest on the table, and how's business, and how's business, and how's business.

Inhale, exhale and enter. Artists' alley is easy to find. Go left and go long. When I get to the back, to the back of the back, to Periscope's row, I see that Matthew Clark's already set up. He's put out a gorgeous assortment of merchandise and his fans are starting to jostle for place on his sketch list. Not surprising, the guy does con sketches that're more polished and professional than some peoples' published work. I want to chat but he's got things to do and frankly, so do I. I want to get my books on the table and I want to get to work.

First sketch request comes from Chris Murrin, who has a cowboy book (Great!) and who wants my piece to follow one by a much better artist than me. (Shit!) I ask if I can take it back with me overnight to the room where I'm staying. I've been reading a Cormac McCarthy novel and can get myself in the mood there. It's hard to conjure up cowboyish feelings on the floor at Comicon. The crowds and the jostling and the mean, tight squints on the Elite event staff make a guy feel a lot more like one of the cattle. 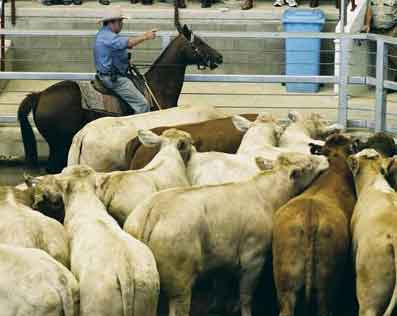 Phone call from Colleen Coover! She's outside with her boyfriend/collaborator Paul Tobin and they need me to run over to the Oni Press booth to find out if they put Paul on their talent list. I find my way to Oni, dodging forklifts like I'm running the bulls in Pamplona, and something happens and I swallow air in a weird way and go into an awful coughing jag. James Lucas Jones says "Hey," then:
"You okay, Steve?"
"Hhhoggk!"
"You want some water or something?"
"Ngarrhkh! Hoogk! Hoogk!"
"Um, do you know where Paul Tobin is? Somehow we wound up with his badge."
"Huurrghk! I... Hurghk!"

Sara Ryan had three new minis and she got tired of waiting for her over-committed husband to draw them, so she came to Periscope:

CLICK illustrated by Dylan Meconis.
This one ties in with Sara's new novel, The Rules for Hearts and guest stars Katrina from Me and Edith Head.

Flytrap: episiode 3, Over the Wall illustrated by Ron Chan.

I'll have mail order info soon. In the meantime, all of these are available at the Periscope section of Artists Alley at Comicon: II-01 through II-06. That's "II" as in "aye-aye" which really makes me wish we'd bothered to do up some kind of nautical-themed signage. Parker: I know you're reading this! Can you do anything before you come in?

So who'll be with us at Comicon anyhow? Lesse, Matthew Clark (Outsiders, Adventures of Superman), Ron Randall(Outsiders, Constantine,) Karl Kesel (Jack Kirby's Galactic Bounty Hunters, Fantastic Four) Ron Chan (Dummy's Guide to Danger, Flytrap), David Hahn (Spider-Man Loves Mary Jane, Bite Club), Steve Lieber (Whiteout, Civil War: Frontline), Colleen Coover (X-men First Class, Banana Sunday), Jesse Hamm ( Good as Lily). Sara Ryan will be with us part of the time, too! Jeff Parker will be around a couple of days, and you can leave messages for him with us. We won't forward them, because, well, fuck Parker, but you can leave them.

Colleen's got her appearance schedule up at her LJ. I'll be at Marvel Thursday from 11-12 pm and at the comic Art Museum's table Friday from noon to one. Saturday, I'll be on the Oni Press panel from 1:30 to 2:30.

I probably shouldn't still do this, but what the hell. Track me down in artist's alley, tell me you read this on the Periscope blog, and I'll scribble out a free quick doodle. I suspect I'm the last guy at Comicon who'll still draw anything for free. Sad, sad. Anyhow, see you there!

I was looking at the Artist's Alley map, trying to figure out how many sherpas we'd need to get all our gear onsite, when I saw this: 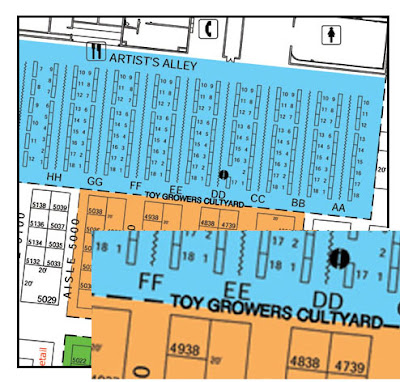 "Toy Growers Cultyard." I can't even parse that. Anyone?

Either way, Jesse Hamm has a brilliant San Diego advice guide that'll come in handy everywhere throughout the con, including the Cultyard.

Colleen has reprinted Star of the East, the great mini-comic the Douglas Wolk mentioned in Reading Comics. More info on price and availablity soon. 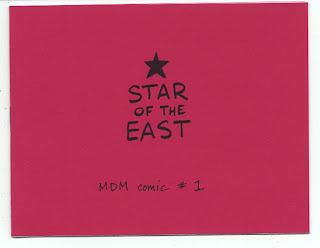 Oh, and lookie here: we've got a new cover for Whiteout: Melt. 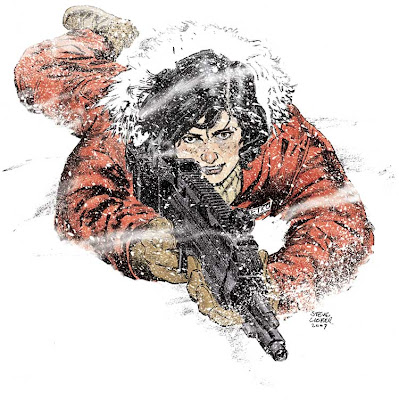 party and the glove 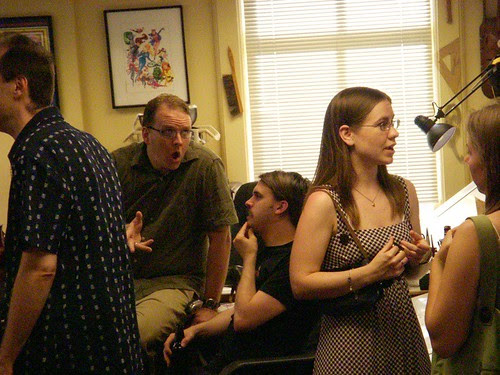 We had our housewarming for the new digs on Sunday. Here's a flickr photoset.

And these are some photos Paul Guinan shot. Viva Zapander! 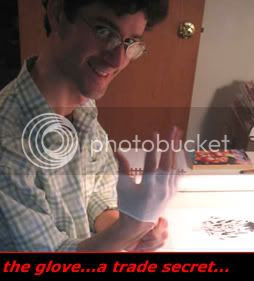 And here's an interview with Periscope's own Aaron McConnell.

Some of you are pretty proactive about the Marvel Adventures books, so if you’re looking for somewhere to talk about the Avengers one, may I suggest popping in to Avengers Forever.org, or Comic Book Resources or ComicBoards? Every week I find people who simply didn’t know the book existed who liked it once they knew it did. And now would be a REALLY GOOD TIME to remind everyone to order the Giant Size issue with the Agents of Atlas in it to show that a fanbase is growing for the book. I’M JUST SAYING.

A little peek at the Whiteout movie.

Extra TV made a visit to the Whiteout set and shot this interview with Kate Beckinsale. Turn down the sound on your computer so you don't have to hear the creepy-ass voice-over guy. This was actually filmed one of the days I was there. And hey, as long as Warner Bros is showing a bit of the look of the film, I guess I might as well put up a few of my sketchbook doodles from the set:

A tech waitiing for instructions.

Director Dominic Sena. When his focus got intense, he'd sort of "conduct" along with the action, moving his hands like there was an orchestra in front of him.

Those Newsarama and Scans Daily links also have comics in them for you to read.

Here's a sharp review of a favorite webcomic of mine- Planet Saturday, by Pittsburgh-based illustrator Monty Kane.

As most of you know, I've got a book that comes out this week:
"Reading Comics: How Graphic Novels Work and What They Mean." There's
going to be a release party for it, too: a First Thursday event this
Thursday evening, July 5, from 6 to 10 PM. It's at Floating World
Comics, an awesome little comics-and-art-book store at 20 NW Fifth
Ave. #101, between Burnside and Couch; their number is 503.241.0227.
The "Reading Comics" release party doubles as an art opening and book
release party for Jeremy Tinder's book "Black Ghost Apple Factory."
It should be a good time.

Jeremy also made a poster for the party, which you can see here.

Here's a sketch from Jonathan Case of a character from his GN in progress, Sea Freak.