Sean Bieri visted the studio today and informed us that his comic JAPE is going to be appearing regularly at serializer.net

Ron Chan's "A Dummy's Guide to Danger" got another good review.

Stumptown is this Friday:

Colleen Coover's assembled a couple of mini-sketchbooks that she'll have for sale. Look for these:

She's also gonna be gloving up with the Thing Hands on Friday, participating in the Comic Art Battle, and Steve Lieber and Colleen are on a panel on Saturday along with Paul Chadwick, Kazu Kibuishi, Aaron Renier, and Ezra Claytan Daniels. I think they're talking about comics.

Sean Bieri and Aaron Renier at the library.

Sean Bieri [Jape, Cool Jerk and Homo Gal, Business Chimp]
Sean Bieri has been called "the King of Minicomix." Fellow minicomics creator Pam Bliss calls Bieri "kind of a Jekyll and Hyde sort of guy: an amazingly skillful illustrator with a profound knowledge of the human face and figure, as well as a superb sense of graphic design. He also has the rudest, silliest, and just plain funniest sense of humor to be found anywhere." Sean's minicomics Cool Jerk and Homo Gal: Defenders of Detroit's Cass Corridor, Jape, Business Chimp, and his zines Modern Women and Judith are all widely acclaimed.

Aaron Renier [Papercutter, Spiral-Bound]
Comics creator Aaron Renier has been active in the Portland zine community for years. Some of his zine-related projects include poster designs for the Portland Zine Symposium and many events at Reading Frenzy. His first full-length all-ages graphic novel, Spiral-Bound, features anthropomorphic animals that might remind you of zinesters! One review says that "the underground newspaper Ana the rabbit is working for is a wish-fulfillment fantasy for zine and comics kids." He recently won an Eisner Award as a Talent Deserving of Wider Recognition. 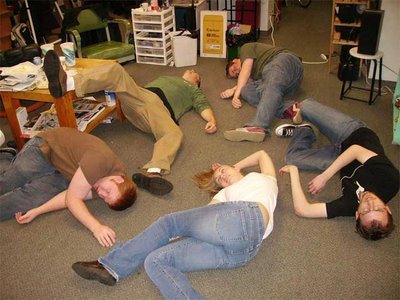 Actually, it's a one word title, not two.

The bit at the end of this article about Hollywood film financing came as a nice surprise. (The UPI link looks like an error, then loads.)

Jeff Parker spoke toNewsarama for an interview recently. And here, for those of you who can't get enough Parker-praise, are a few more of the countless great reviews he's been landing lately: Bully's Comics | | The ISB | Zombies are People, Too | Signal Bleed | Genetic Freak Online | Poptown

(And for the record, that's an Edsel in the Poptown link, not a Cadillac.)

Over at Random Happenstance, Googum offers some apt observations about Karl Kesel's work.

Karl did a bit of photoshop work for Marvel recently, helping them produce the bluelines of the "lost" Lee-Kirby Fantastic Four story for Joe Sinnott to ink. Here's Karl, Parker, and Ron Randall admiring the pages: 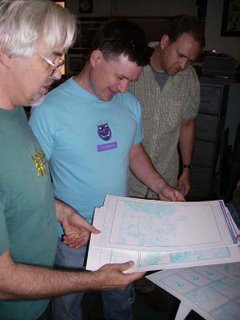 And here are a couple of the pages: 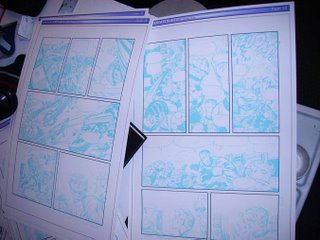 This is cool: A whole bunch of short Joe Kubert stories you've probably never seen before.