Matthew will be showing art from after his heart attack, so that means there'll be pages from his work on Superman/Batman, The Outsiders and some DC covers. Also on display is an enormous collaboration piece with Aimee Dieterle: 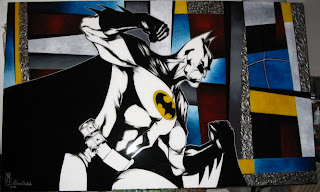 Appreciating Comics panel at the library. 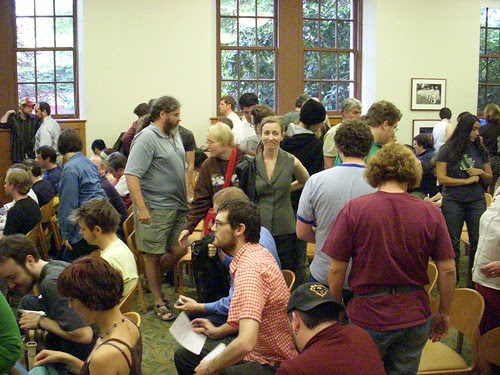 Big scramble for seats. It was standing room only, and they wound up turning a lot of people away.

Scott mixin' it up, Arsenio-style. 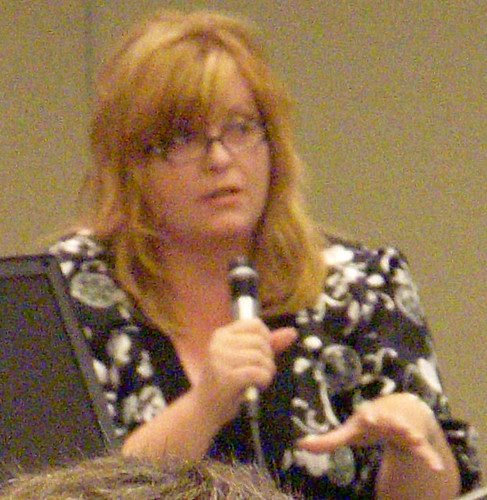 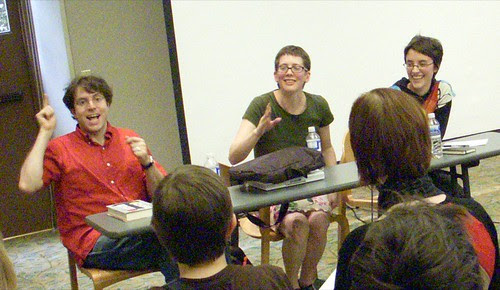 Big laffs all around. 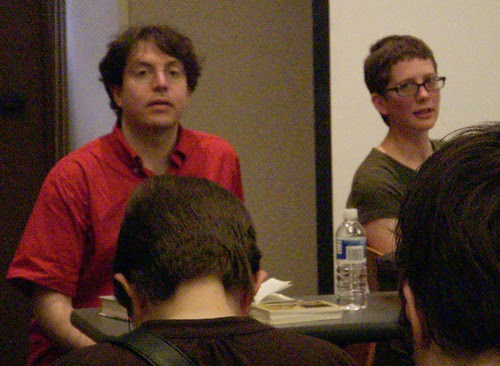 Douglas takes another question. Colleen doesn't think he should. 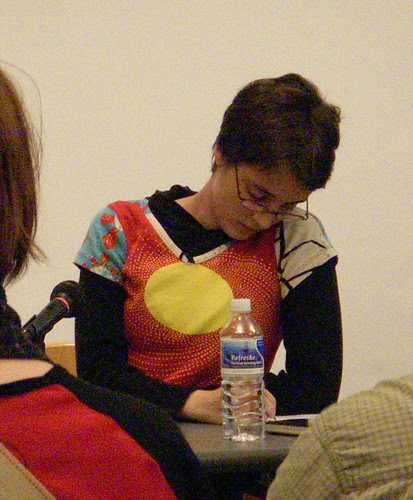 Dylan got a page and a half of Family Man inked between questions. 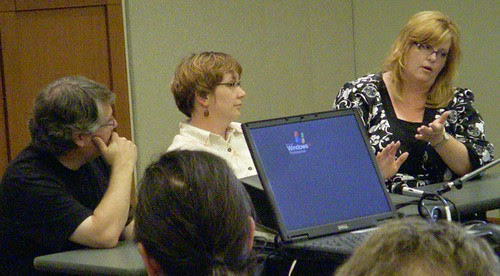 Gail clarifies something. Scott's thoughtful. Jenn's looking at you out of the corner of her eye, so don't try sneaking up. 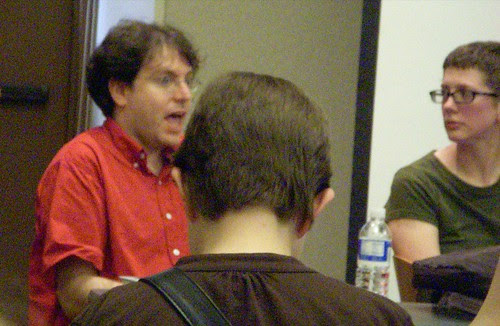 Douglas said something alarming, but I'll be damned if I can remember what it was. 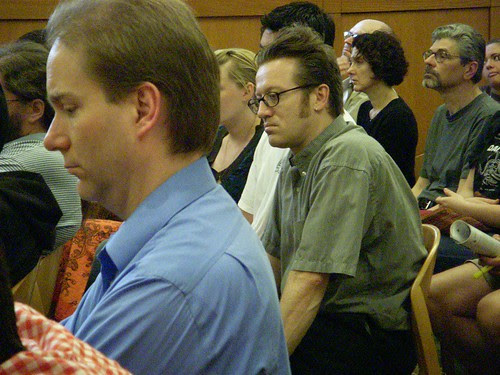 Jamie Rich, like those around him, pausing to reflect on just what all of this really means. 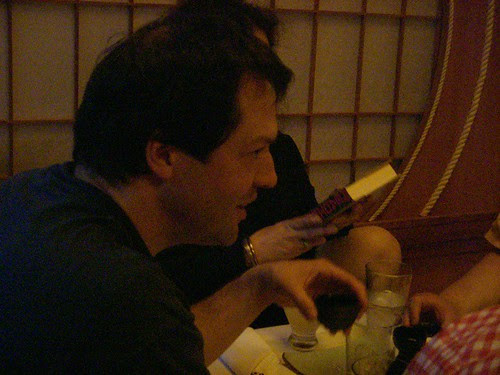 At dinner, Shannon Wheeler calmly explains that single panel cartoons shouldn't be arbitrarily excluded from any definition of the medium... 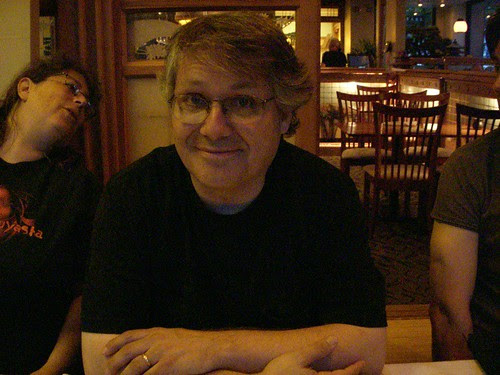 ...but Scott is having too good a time to revisit that one. 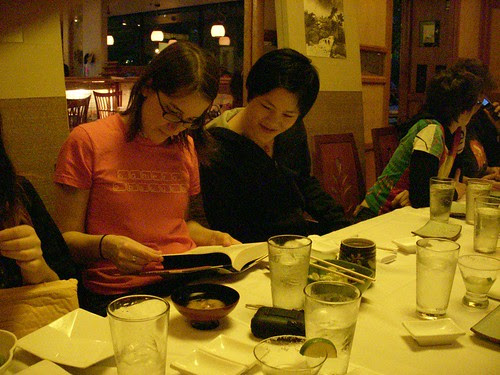 Jen and Vera go straight to the index of Douglas' new book. 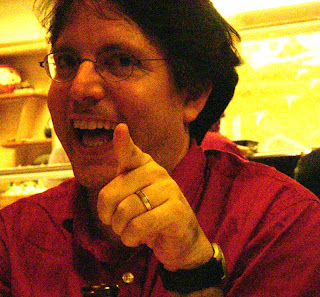 Douglas Wolk is talking about your comic.

Periscope's own Rick Remender interviewed at The Word Balloon
http://media.libsyn.com/media/wordballoon/WBrickremender0607.mp3

I'll leave it to you folks to guess what the URL for Thursday's excerpt will be.

Join Scott McCloud, author of Making Comics: Storytelling Secrets of Comics, Manga, and Graphic Novels, and a panel of Oregon cartoonists for a lively, wide-ranging conversation focused on what can be done in comics that can't be done anywhere else.

Douglas Wolk, author of Reading Comics: How Graphic Novels Work and What They Mean, moderates the discussion.

Appreciating Comics is made possible by The Library Foundation and presented in conjunction with the Graphic Novel Intensive at the Pacific Northwest College of Art.

Space at programs is limited. Seating is available on a first-come, first-served basis.

This just in from New York magazine:

All week on the Comics Page, we're excerpting Good As Lily, a charming English-language manga written by Derek Kirk Kim and drawn by Jesse Hamm, coming in August from Minx.

Read the first of five installments.

Also, some great reviews of Jeff Parker and Mike Wieringo's Spider-man/Fantastic Four miniseries. Kleefeld | Zodarzone | Every Day is like Wednesday | Living Between Wednesdays |

Art Buchwald had a Thanksgiving column that he used to rerun every year. I think I'm going to approach Father's Day the same way. This was originally published in Portland Monthly magazine. (click to enlarge)

This week, the town is ours. 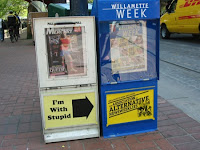 I love that photo. Anyhow, Periscope has the feature illustrations in both of this week's free papers. Colleen Coover's done all the art for the Portland Mercury's Pride Week supplement. and Rich Ellis has the cover and nearly a dozen illustrations in the latest Willamette Week.

The Mercury also announced that they're changing their name to the Portland Periscope.

Mercury Studio, the largest studio of freelance comic book creators in North America, announced today that it has a new name: Periscope. This follows a move to a new space overlooking downtown Portland, long known as a major hub of the comics industry.

"We often invited creators from all ends of the field to come by and work," explained Jeff Parker, a Periscope member best known for his writing at Marvel Comics. "As we were looking to move to a larger space, Steve Lieber suggested we go ahead and invite some of them to have permanent desks. Now we're a fairly thorough cross-section of the comics industry."

"We can really pool resources and let our skills cross-pollinate," added founding member David Hahn. " Now it's common to see a major emerging talent like Colleen Coover swap tips with an established veteran like Ron Randall, or Jesse Hamm assisting Matthew Clark in between his own graphic novels."

New member Dylan Meconis describes the varied work week of the new assemblage. "We're doing storyboards, editorial illustration, theatrical and animation design. On any given day, there can be a dozen different projects going on here- and of course, comics!"

Pete Woods appreciates the new level of energy around Periscope, but predicts a snag. "If we don't get a second Cintiq Graphics Tablet, it could get ugly."

Periscope credits include properties like Superman, Batman, Wonder Woman, The Fantastic Four, Spider-Man and prestigious graphic novels like Paul Guinan's Boilerplate and Steve Lieber's Whiteout, currently filming at Warner Brothers with Kate Beckinsale in the lead role. Upcoming GN's include the new Minx line's Good As Lily with work by Hamm, and Meconis' new book, Wire Mothers: Harry Harlow and the Science of Love, which has been greeted with excellent reviews.

A complete roster of members can be found at http://www.periscopestudio.com. And for further information, contact Steve Lieber at periscope.studio (at) gmail.com

The Portland Tribune picked up on our show at Floating World and has some art. And that show, by the way is at 20 N.W. Fifth Ave. #101, Call 503-241-0227 for more info. (Special thanks to VJ for reminding us that information like the address of an event can come in handy.)

This is the sort of thing that Jesse blogs about better than I do, but I followed a Journalista link to Austin Kleon's post about "one point" perspective and thought it needed some sort of reply. (And I posted one there as well as here.) I won't quote Austin's post because most of it is images, but just to clarify I think the term he meant to use was “linear perspective” not "one-point perspective." One-point perspective is a type of linear perspective. It’s used when there is only one vanishing point needed to construct an object or a space in a picture.

Obviously when says “death to one point perspective” it’s just fun hyperbole, but I think in rejecting linear perspective, he's throwing out the baby with the bathwater. It’s an extremely useful system for describing basic physical facts in a picture, like the distance between objects or their relative size. And offering readers the illusion of varying degrees of depth throughout the pages of a comic does a lot to keep the eye interested.

What else? Jeff Parker's Walk-In is becoming a sleeper favorite with the people who've found it. Here's a review of the first five issues.

Comic-Con has announced that they're "currently talking to the major Hollywood studios and the following films are under consideration for presentations at this year's event."

I think that last one is actually this:

This means there might be a big panel promoting the movie at SDCC, which means I'll have to actually stand up, leave my chair in artists alley and cross the floor in the middle of Comicon. I'm... I'm not sure if I'm ready for that. 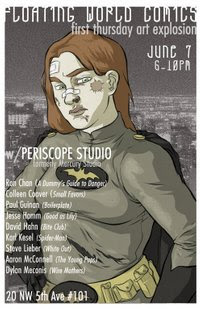 Portland’s best kept secret: we are a comics town. The list of local comics creators and publishers gets larger every year. I think it should be a point of pride that Portland is the West Coast comics capital of the nation.

For example, PERISCOPE (formerly MERCURY STUDIO) located in downtown Portland is the largest in the comic book industry. Home to over 20 artists and writers (including the artists of Superman, Batman,Wonder Woman, Fantastic Four, and Spider-Man), this studio represents the best professionals working in the industry as well as new emerging artists.

First Thursday, June 7th from 6–10pm, Floating World Comics is proud to present a PERISCOPE STUDIO art show featuring as much of their all-star roster we could fit in the store! The following artists will be on hand displaying original comic art and comics:

Actually, Dylan will be on an airplane, and I'll still be in Ohio, but the rest is right on target. But what's all this about a new name? Stay tuned for the press release!