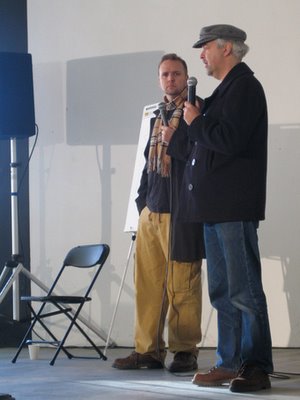 Last week Ron Randall and I gave a talk to Ziba Design Group, who were having a special "Design Day" event. Kind of like one of those retreats where you have to fall backwords and let that asshole from Payroll catch you so later you'll trust that he actually processes your check. But much better! Under the guidance of Eric Helsin, they split up into ten groups of people from different parts of the company who would ordinarily not work with each other. Then Ron and I (this is Parker)blabbed for an hour about comic book heroes, specifically superheroes, their histories, costumes, origins, and so on. We tried to throw in our own creative strategies as best we could, and then the teams were turned loose for the rest of the day with a bunch of odd supplies to create their own superhero. At the end of the day, a panel of child judges were coming in to say which they liked best. 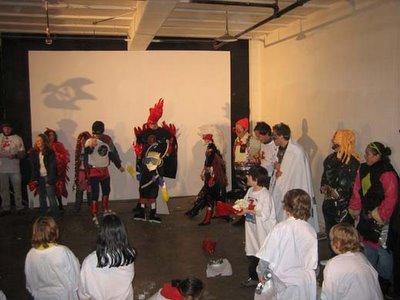 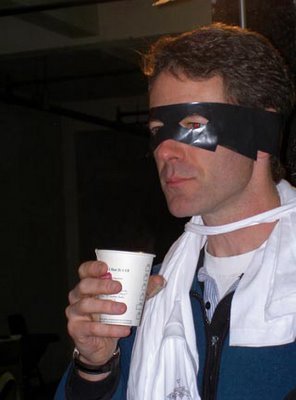 Ziba had rented a warehouse up two blocks from their offices- an unheated warehouse, it's important to note. It was freezing in there, and the little space heaters brought in only helped if you sat on them. So Ron and I were happy to cut out after our work was done. But I came back about an hour later to check everyone's progress and offer advice if needed. It was fascinating, in an anthropological sense. So many of the groups were going down the same track- they generally tended to think the heroes should be kids, even though none of the characters we talked about were. And several groups decided to hedge their bets and make a boy/girl duo so as to appeal broadly. I warned that the setup here was inherently adverse to what I think is ideal for creating a character-- that is, creating by committee. 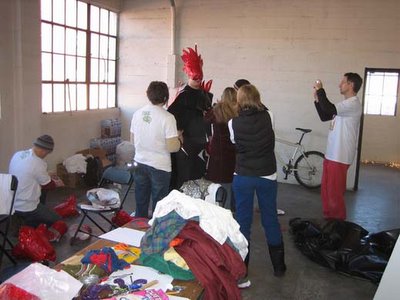 It was interesting to see which groups worked smoothly and got up and running faster, and how others were stalled and not clicking. The ones who started with the parameters of what they had to work with in way of costume supplies got moving right away. Lots of people kept gravitating towards having their heroes commune with animals. The winner was "Double-U", a kid from an alternate universe you could contact in the mirror, and he would come take your punishment for you, do your chores, etc. Everyone from this goody-twoshoes world had a large butt, so the team worked in a visual gag. And somehow, his power included giving out candy, which effectively bought the votes. I can't fault them for doing what worked to win, but it sure didn't get near any aspects of what heroic fiction is supposed to impart on the reader. But it was entertaining, and that's of paramount importance. We enjoyed the event, and I think once the Ziba employees thawed out, they did too. 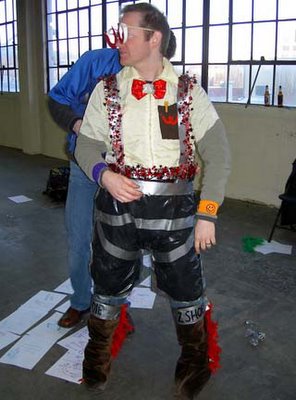 Awful, if you think about it.

Just watched "A Charlie Brown Thanksgiving." After all the business with popcorn and toast, it ends with Snoopy and Woodstock carving up a turkey and digging in. Urgh. Is there such a thing as mad-bird disease?

NPR has an interview from this weekends Sunday show interviewing Chris Elliott on Shroud of the Thwacker. Unless I missed it, they didn't bring up The Boilerplate Controversy. Instead they lobbed a nice big softball, probably in deference to his dad of long radio fame. So Shroud gets "the NPR bump", that holy grail of book writers everywhere-- well, no, I guess having Oprah command her legions to read your book is still better--still, a huge chunk of the reading populus now know about it. Which we here at Mercury think is in large part thanks to the controversy. At any rate, we want the book to do well because now Paul Guinan is irrevocably tied to it. And we still think Elliott is funny, if not a particularly canny source user. Go listen.

David here. Here are some of my penciled and inked pages from issue # 1 of Bite Club: Vampire Crimes Unit, due out from Vertigo late this winter. These are pages I colored myself as samples, but the art in the books will be colored again by the talented Brian Miller at Hi Fi. So, I just thought I post 'em and junk. 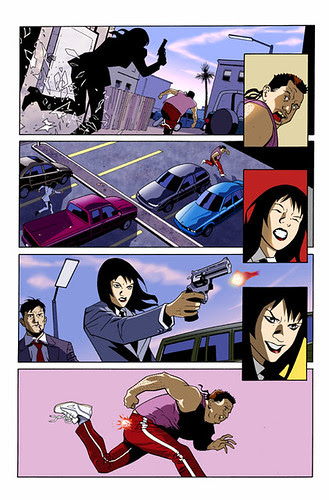 Congratulations to Karen Majewski, the new mayor of Hamtramck, Michigan. Some of you might know Karen's husband, mini-comics legend Matt Feazell.

Elsewhere, there's an interview with me up at Legions of Gotham, just in time for the arrival of Gotham Central #37, which, as an Infinite Crisis crossover, has been getting a lot of attention.

Speaking of which, here's a look at a page of the original art for the issue. It's atypical, but I'm quite happy with it. Click for bigness. 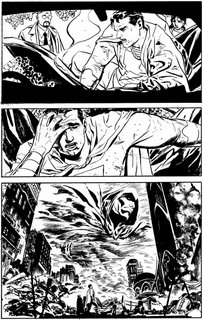 An OS X driver for the Mustek Scanexpress a3 USB

The Mustek-on-a-mac instructions have been moved to our new blog:
http://periscopestudio.com/?p=197 Thanks!

Lots of stuff to post today. First up, Matthew Clark's in the news. Matthew's latest issue of Outsiders has, we're told, been bagged and labeled FOR MATURE READERS by a retaailer in Arkansas.

Tierney had a surprise. He had a call from a customer who also works in local law enforcement to warn him about the potential dangers of selling "homosexual content" in "Outsiders" #30.

The sad thing, of course, is that it's the shot of the two guys kissing that's causing trouble. If the panel showed a guy busting another guy in the mouth with a rock, that wouldn't be a problem. Crack open his skull with a pipe-wrench? Go for it. But, kissing? Yow! Think of the children! Oy.

(And please note that the retailer in question is not, repeat NOT, some crazy homophobe. He's a good guy and a sensible businessman doing his best to work with the laws of his community.)

In less frustrating news, Matthew was interviewed over at Comicon.

Here's one more Boilergate article to read. This one's of particular interest because it actually focuses on the cartoonist rather than the celebrity who accidentally ripped him off.

Terri's got a lot on her desk these days. 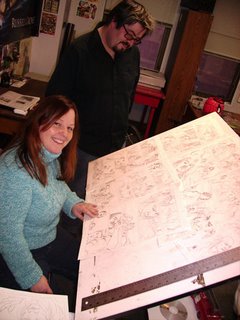 So does Jeff Parker. 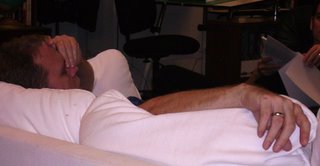 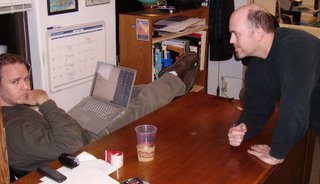 "The site includes numerous copyright notices, but neither Elliott nor his publisher, Miramax Books, seemed to have noticed. Elliott somehow convinced himself that Boilerplate and Campion were actual historical figures and the two characters appear throughout Thwacker. Elliott offers a now humorous acknowledgement to his brother, Bob Elliott Jr. for research assistance, that notes, "…you can't make up something like Boilerplate." That's for sure."