Even better than egosurfing: Worldcat

WORLDCAT is now available to the public. It's a big search of world library catalogs; you can use it to search for books and publications to find out out how many library systems carry them. It's not an exhaustive seach- plenty of libraries don't participate, books are sometimes double listed, and the results give you library systems, not individual branches. (Though further clicks will take you to individual branch holdings and even whether the book is on the shelf or out.) I find it oddly compelling to get an idea of the extent to which a given book or series has penetrated the library market. A few searches to get you started: BONE | LOCAS | TRANSMETROPOLITAN | NARUTO. 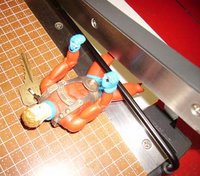 Also, Tom Spurgeon's site The Comics Reporter declared Parker the "Winner of the Week" based on the enthusiastic response to AofA. And here's some new art from Leonard. 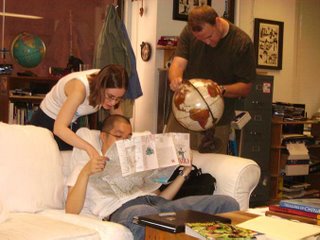 There's a new cartoonist in Portland: Aaron McConnell, whose new comic The Young Pups has been doing great in Dimestore Productions Small Press Idol, has arrived in Portland with his family. We're all eager to get to know him better. Welcome to Stumptown, Aaron! 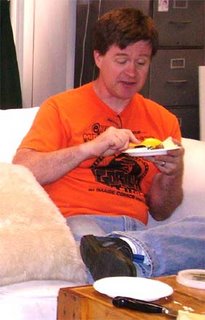 In other local cartooning news, Kevin Moore's been updating his webcomic SHELDON like crazy. Click over to read about the Pig Who Can't Stay Put.

Seriously, we have this argument like, twice a week.

Some photos of friends of the studio, courtesy of Susan:

Ron Chan's debut comic A Dummy's Guide to Danger shipped a couple of weeks ago. Here's a great review from Broken Frontier

It looks like I really did do a cover for the 2nd printing of Civil War: Frontline #1. Weird. It looks like this:

I apologize if anyone actually visualizes that headline.

Jeff Parker was interviewed today at Tom Spurgeon's site The Comics Reporter. They talk Toth, Interman, Agents of Atlas, and much, much more. 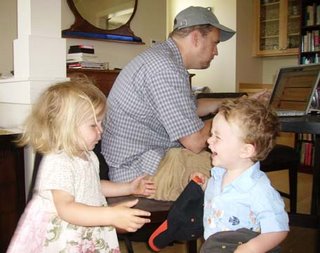 
Over on her CBR board, Gail Simone asked everyone to come up with one thing they would change about the comics industry if they could. As a Pie-in-the-sky offering, I said I wish every genre had fans as numerous and enthusiastic as superhero stories do. That'd sure be nice. I'd like a pony, too. More realistically, here are a few things I'd be happy to see the industry do.

1: Start a program run by Diamond with advice from the CBIA to make it easier for entrepreneurs to open direct-market stores in under-served markets. I'd like to see some kind of new-store mentoring program, combined with terms that make it possible for qualifying new stores to build their initial stock without starting off impossibly deep in the red.

2. Until that happens, companies could sponsor mobile book-carts to sell their comics (and maybe those of some partnering companies) in high-traffic, under-served locations. They could also partner with local retailers to do this. The number one problem comics have right now is that there aren't enough places for people to buy them. This would be a temporary solution, but I can see running a book cart as being a stepping-stone to running a store the same way that running a food cart is often a precursor to running a restaurant.

3: Okay maybe that last one's a bit much. Here's a much more realistic suggestion: Someone should pull together a resource that helps libraries, schools and universities to bring in local cartoonists for author visits and artists-in-residence positions. This could start with Tom Spurgeon's Scene Listing, whiuch would be used to make an opt-in list of those who might be interested in this sort of thing. The site could also incorporate some short articles explaining how these arangements typically work, and maybe include a couple of annotated sample agreements between artists and organizations.

4: More cartoonists need to take advantage of the grant systems that have supported the fine arts in this country for the last half century.

5: Corporate work-for-hire publishers could move further towards the world of legitimate book publishing by expanding their creator-owned lines and eliminating the contractual provisions that deprive the creator/owners of any real control.

6. Someone needs to assemble a regularly updated pricing and ethical guideline for freelancers and publishers. The Graphic Artists Guild publishes one for commercial artists and it includes a bit about comics, but it'd be great to see one just for our business.

White as hell, but not so tubby: Paul Jenkins is at Wizard World Chicago, letting everyone in on the secrets of writing for comics..

A bunch of us went to City Hall on Sunday for the multimedia art exhibit and fashion show. Ran into a bunch of familiar faces, including Greg Means of Tugboat Press. Several pages of Colleen Coover's original art were on the wall right outside of City Commisioner Sam Adams' office. These were generally mobbed with intrigued viewers, though the only picture I shot that came out clearly was this one, which makes it look like the exhibit was nearly deserted. 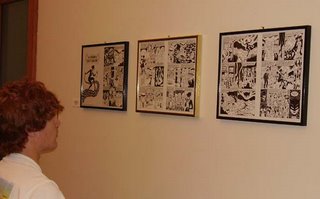 A number of people have remarked on the reformatting of David Hahn's first BITE CLUB miniseries from typically-sized comic to tankobon-sized tpb. Is it being discovered by manga fans? Maybe. <--This link, by the way, is absolutely Not Safe For Work.

If I had made it to San Diego, I'd have been really pissed at myself for missing this panel: Linda Medley talks comics, moderated by Jim Ottaviani.

OUTSIDERS #39, illustrated by the unbeatable tag team of Matthew Clark and Ron Randall, seems to be making some fans happy. Matthew and Ron both deserve special credit for their work in this one: Matthew for getting right back to work after some serious medical issues and Ron for stepping in at the last minute and doing such a remarkable job of sublimated his own style to better unify his pages with the one Matthew had drawn. That's incredibly hard for an artist to do, (particularly when the artist is as precise as Matthew) and it isn't especially glamorous. The better you do, the less you audience will notice you did anything. Hats off to Ron and Matthew for turning out such great work under difficult conditions. 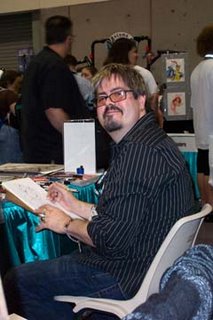 Next time: a bunch more pictures from Susan if she gives the okay.

The reviews are coming in for the first issue of Jeff Parker's AGENTS OF ATLAS, and it's thumbs up all around:
Stumblebum Studios, | Dave Van Domelen, | Velocity Comics, |
Comics Nexus, | Paperback Reader, | Dewey's Comics.

Drifting back to normal.

The time around San Diego is always weird, and this was no exception. Most of Mercury Studio left town for the show, but we were actually pretty busy here. Portland was hit by a heat wave that weekend, and our building is air conditioned, so a bunch of other local cartoonists came by to use the empty desks: Bill Mudron, Jesse Hamm, Dylan Meconis, Colleen Coover, Root Nibot and Jenn Manley Lee all sat in and got stuff done. It was like a mini con for the Legion of Substitute Mercury. Jesse has a couple of "reports" about it : day one, and day two


The only real reportage comes from Parker, talking about the Toth panel. Well, that and Willamette Week's David Walker.

Colleen Coover's in the studio again today. Right now she's chowing down on a sandwich, but I think she's got pages from her next GN with her. What I've seen looks fantastic- her best work yet. If you're in Portland, you can see some of her originals at this:
LOCALLY GROWN: Fashionistas & Underground artists
CITY HALL FIRST THURSDAY ART SHOW
Thursday August 3rd 5-7pm
1220 SW 4th Between Madison and Jefferson

Leland Purvis and Elizabeth Genco are bringing their marriage tour to Portland this week and we're all looking forward to seeing them. Leland- if you're reading, come down and work.

More Parker: Read a big chunk of his Man Called Hurricane story, courtesy of the daily scanners. And this gentleman thought that that story had the Best Panel of the Week. Parker & Coker and Hollingsworth- hard to beat that team.

Nice review of David Hahn's BITE CLUB: VCU Sure beats that guy who thought David Tischman was drawing it.

I'm told I've drawn a cover for the reprint of Civil War: Frontline #1. Cool! Speedball himself got some coverage in the Miami Herald. My career is weird.