Lieber in Seattle, many others at Wonder Woman day.

I'll be a guest at theSeattle Comicard Convention. Seattle, WA. October 28, 2007. 10 AM to 5 PM. in the Rainier Room at Seattle Center. Guests include Ben Hansen, Brandon Jerwa, Chad Du Lac, Chris Anderson, Paul Gulacy, Quenton Shaw, Randy Emberlin, Ryan Miskiman, and Tom Peyer. And, uh, me. Stop by, say hey and if I've got time, I'll doodle out a free quick sketch for you.

But if you're not in Seattle his weekend, you're probably in Portland. Well, not really, but this is actually a fairly common attitude here in the Pacific Northwest. Anyway, Wonder Woman Day 2 is also being held on Sunday the 28th. There'll be guests including Gail Simone, Phil Jimenez, and Anne Timmons, prizes, fun, and art from dozens and dozens of terrific cartoonists, including several from Periscope, all to benefit a great cause.

Our friends at Floating World Comics write to say:

Join us this 1st Thursday, Nov. 1st for a special Day
of the Dead art celebration with local artist Farel
Dalrymple and Seattle artist Kazimir Strzepek.
Farel made a big splash in the indy comics scene with
his debut 'Pop Gun War' and his acclaimed 'Meathaus'
anthologies. Last month he made his Marvel comics
debut with 'Omega the Unknown' written by novelist
Jonthan Lethem. Kazimir is a relative newcomer to the indy comics
world, but his debut "The Mourning Star" won an Ignatz
award for Outstanding Series!

The show runs through Dec. 3rd.

Paul puts the scope in Periscope.

As Paul works on his coffee table tome Boilerplate: History's Mechanical Marvel, he maintains an elusive political stance. Is Boilerplate right-wing military history, or left-wing social history? Getting clues from his personal life can be equally confusing. He was involved with peace movements before America went into Iraq, but a few weeks ago it looked like he was training for a contractor position over there. He's posted pictures of an adventure in the woods with his dog--and guns with telescopic sights! Donations are being accepted to help with Paul's bipolar disorder...

And here's a terrific interview with Portland's own Kevin Moore, author/artist of the great all-ages comic WANDERLOST (formerly known as "Sheldon.")

Q. You each work in slightly different, though certainly overlapping, sectors of fandom. What have you learned from each other?

BRUCE CAMPBELL: Well, I've learned that you've got to do comics and merchandising and everything else with your movies. It's a better deal.
The nice thing about working with Dark Horse is they not only make movies, they can handle publishing, they can handle comics, they do merchandising. That's been kind of nice for me, working with a company that has it all wrapped up in a one-stop shop.

MIKE RICHARDSON: The big lesson, for me, was that you can actually have fun making a movie.

BRUCE CAMPBELL: Yeah, every so often a mistake happens and people have fun.

So that's where that Ditko hair came from. 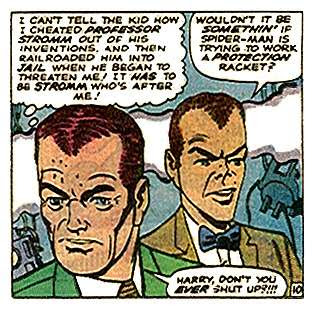 Ditko panel from the Ditko Looked Up site.

I think I'd rather have this than a legit one.

(hat tip to Monty Kane of Planet Saturday for pointing us towards the photo from engrish.com.)

This was a pleasant surprise. I was wandering through a Borders bookstore near the studio and saw this graphic novel display: 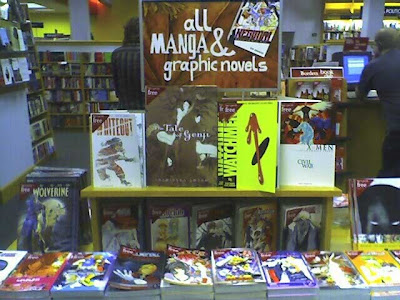 I'm pretty sure that's the first time I've seen anything of mine on display in a bookstore. I've no idea if the person responsible heard about the movie or just liked the new cover or what, but it's way, way flattering to be propped up next to Amano and Watchmen.

John Callahan on Live Wire Radio.
Friday, Jan 19 at 8pm at The Aladdin Theater 3017 SE Milwaukie
Live Wire is a radio variety show recorded in front of a theater audience at the Aladdin Theater and broadcast on Oregon Public Broadcasting (OPB). The show includes original sketch comedy, illuminating interviews and local and national musical guests.� Other guests on January 19th include: Alex Steffan, editor of Worldchanging: A Users Guide for the 21st Century, journalist and author Paul Linnman and musical guests Everclear and Hillstomp.

"Talisman is McNeil's sonnet to the love of a great book. "It's about being a book nerd, loving a story," McNeil once said, and it envisions a future when that identity and such passion are anachronisms." 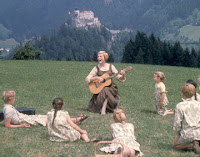 I just need to note for the record that at 3:58 on a Friday there's a bunch of us singing along with Julie Andrews on the Sound of Music soundtrack.

Getting published in a lit magazine is usually more difficult.

I was at the Alberta food co-op last night with Sara, browsing the magazine rack when I spotted what looked like a new literary magazine:A Public Space. Something in the design makes me think of Tin House, which I always enjoy. Quick flip to the table of contents, and, hey, William Vollmann and a section of writing about Antarctica? I'm sold. I toss it in the basket with the apples and oatmeal and don't give it another thought until today, when I'm on the MAX, reading and I flip to the Antarctica section at the back and see this: 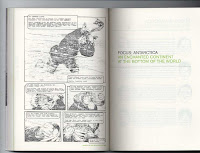 It's a bizarre feeling seeing your name and work in a magazine when you weren't expecting it. I actually looked around, sort of wondering if I was being punked. But no, the page was bound in, and Greg and I have short bios in the contributors section. So, um, I'm a contributor to the magazine I randomly picked up off the rack at a grocery store. I kind of like to think Vollmann was surprised, too.

Portland comic book artist (and creator/artist/writer of critically-acclaimed Pop Gun War) Farel Dalrymple will be on hand at the event to talk about Omega: The Unknown, comics, art and more. Purchase a copy of Omega: The Unknown #1 at Bridge City Comics and Farel will autograph it free of charge.

This event will coincide with Mississippi Avenue's 2nd Thursday Music Walk event so there will be plenty of fun for the whole family!

So I've been reading a blog written by Pixar animators who also, at least when they started the blog, were teaching animation at night at the Academy of Art in San Francisco. A lot of the stuff that they talk about for animation is really very applicable to drawing a comic or a storyboard.
Like this, from a post about how to improve your characters' "acting," from Dr. Stephen G:

"Here is an example of the things you might want to be thinking about when approaching a shot.

The Shot
Character at a bus stop and he just missed his bus.

Answers to questions like these will help you start to understand the character and their appropriate reactions to situations like a character missing his bus. These answers start to help you build your performance, the character’s acting. You start having things you can act out that make sense rather than just hitting a bunch of standard poses that don’t relate to the character’s current emotional state and situation.

The first thing I do, which I think is super important, is I try to capture all of the above questions in one frame. I create my story frame or my KEY, Golden drawing, whatever you want to call it, and then determine what else needs to be in the shot to get the story point across. Less is more."

Written by Brian Posehn and Gerry Duggan, the novel revolves around Santa Claus, who turns his back on Christmas and goes into seclusion after nuclear war has destroyed the world. When the North Pole gets attacked, Santa must battle zombies and renegades to save the remaining survivors, and ultimately, the holiday."

Variety reports on the sale of The Last Christmas, illustrated by Rick Remender.

"Meconis' illustrations give us a square-jawed man with a speech impediment who drinks, chain-smokes and works in his shirt sleeves. The image of him on the night he conceives of his famous experiment is marvelous. Working late on Christmas Eve, Harlow accidentally locks himself in the monkeys' cage. The animals crawl all over him, nestling against his shoulders, and the annoyed look on his face is priceless."

The L.A. Times reviews Jim Ottaviani and Dylan Meconis' Wire Mothers: Harry Harlow and the Science of Love. (They also say she's an OEL manga artist, but it's a great review otherwise, so what the hell.) 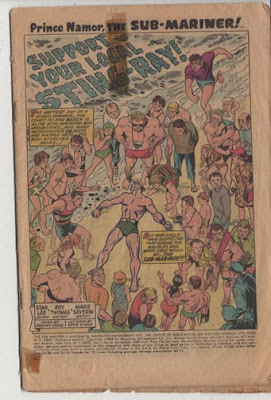 My mother threw out most of my comics when I went off to college, but a few years ago when my dad died, I found a brown paper bag in his basement containing a few comics I'd left at his place at some point in my early teens. Among them was this, this first comic I ever owned.

5 year old me seems to have carefully outlined most of the Namor figures throughout the comic in ballpoint, which would make the Marie Severin/Johnny Craig team my first artistic influence. Severin reasserted this influence six or seven years later by sketching me a free drawing at a con in Pittsburgh, which I took home and copied obsessively several hundred times.

So, any of you folks out there remember your first comic? 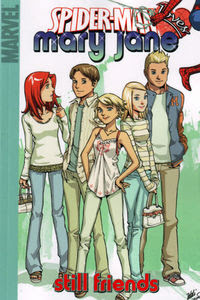 "Team MJ welcomes new series artist David Hahn! In the aftermath of recent shocking revelations, what's the story between Mary Jane and Peter? Between Peter and Gwen? Between Liz and - Oh, who CARES?! Is that Firestar?! What's the second most awesome redhead in the world got planned for Spidey this time? Well, we're sure not gonna tell you here! Collecting SPIDER-MAN LOVES MARY JANE #16-20."

"Now, I did have some reservations about coming to this show. I've been a mainstream comics collector and reader, and really thought of a lot of indie stuff as being a bunch of disgruntled political burnouts. Not true at all and I've spent more money at this show than I would at a mainstream comic convention. Being exposed to indie press and creators has been a refreshing experience for me."

I'm really glad to see a post like this. Stumptown's not an indie show- it's about shining a spotlight on the breadth of the entire medium. 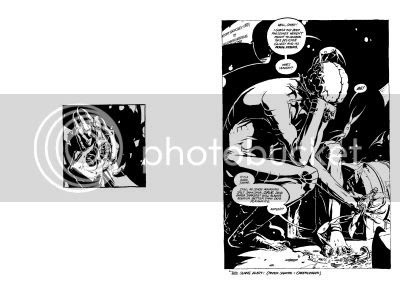 CBG: For those not in the know, please explain the basic concept of Sea Freak.

JC: Sea Freak is the story of an atomic sea mutant in the 1960's whose poet soul is at odds with his need to eat teeny boppers. And that's not his only worry. He also has a chorus of three little crabs living on his body, and they want nothing to do with a change of diet. Still, he's adopted a human sense of justice from reading old Shakespeare plays, bottled and tossed into the sea by an unknown party. He decides to follow the bottles' trail, hoping to find a kindred spirit at the other end, and to at last be free of his monstery ways... It's only when he finds the trail's end that he realizes how far he has to go.

Carla and Dylan at the red table.

Carla Speed McNeil visited the studio today. She and Dylan Meconis were cackling like lunatics working together on some design sketches. 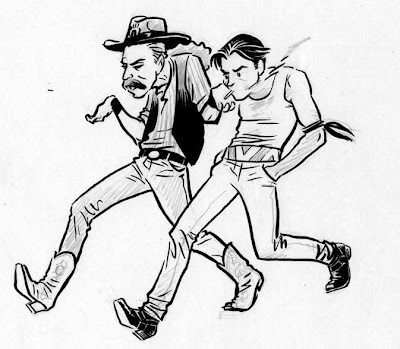 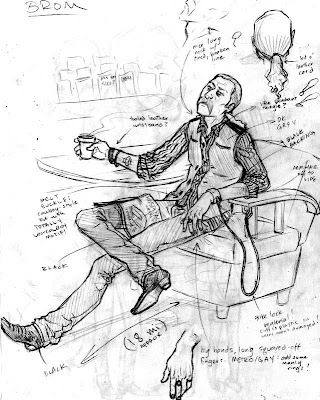 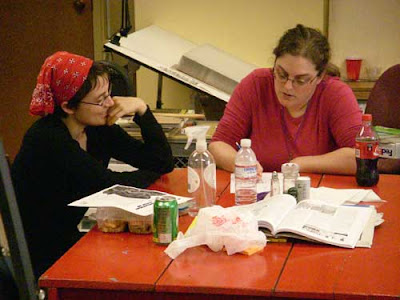