While Sara and I are in the undisclosed location here in Ohio, she's been poking around in the closets and basements. Today she found some old scrapbooks that her father had kept. This one is from 1947. Along with various local stories clipped from the paper, and meticulously kept baseball statistics worked out in ballpoint, there was this page of Walt Ditzen's sports themed comic strip "Three Squares." 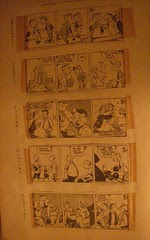 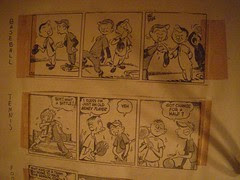 After that, an article about Ohio's greatest cartoonist, Milton Caniff. The scrapbook is from '47, so of course the article is there to announce the arrival of his new strip Steve Canyon. (Clicking on the picture below will open up a new window with a scan big enough to read.) 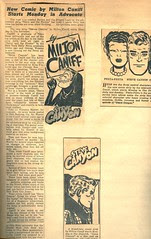 And, wonder of wonders, this was followed up with a couple of pages where Sara's dad had clipped the first two weeks of dailies and Sundays! Here's the first week: 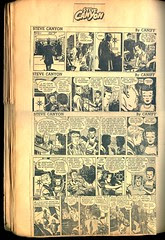 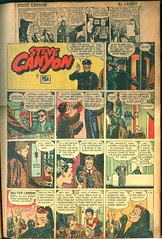 I love that Caniff took a week to build some mystery around Canyon before bringing the hero on stage in the Sunday strip. And I'm delighted by that opening shot in the first daily- the gutsy symmetrical composition of Calhoun's pompous underling approaching Canyon's building in bright sunlight. Despite all the heavy black brushwork, there's a lightness in the body language, the character types, and the overall atmosphere of this opening week that makes me think of witty post-war Technicolor movies, the kind that might've starred Cary Grant or Tony Randall. Great fun. 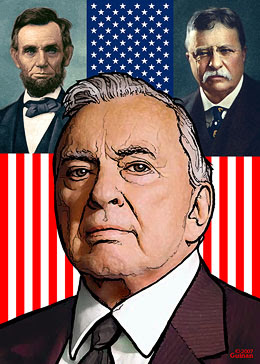 several early copies of X-Men First Class #6 that have pages seriously out of order. Like, the Colleen Coover cartoon falls in the middle of the book now, out of order. I assume Marvel will tell shops to hold on to these books while they make the printer fix things, but just in case watch out this Thursday. This is especially irksome because I was excited about the new storyline starting, and we have the longest Coover story yet. Oh well, it’s not like an asteroid is headed directly for Earth or anything. Which it isn’t.

Here's the cover, drawn by Eric Nguyen. In a better world I'd also be able to show you a panel or two from Colleen Coover's backup story, but that would be a world in which I'm not in Ohio right now. 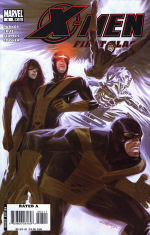 I don't have a Mid-Ohio report.

And here I am in the middle of Ohio, Columbus to be exact. As noted below, Sara and I will be in artists alley. Among other business there, I'll be delivering this commission:

After I drew that "trois-crayon" Wonder Woman for the WWday auction, I had a request for a Green Lantern drawing done in the same manner. Much fun to work this way, and I think I'm going to start incorporating it into my life drawing.
Speaking of which, here's a charcoal drawing of a friend from a recent session: 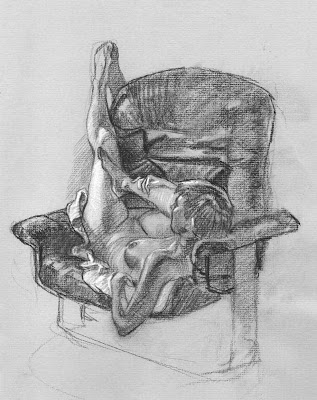 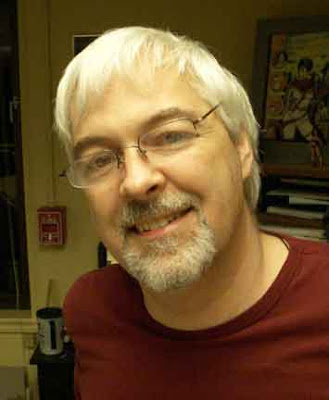 Portland animator/cartoonist Carolyn Main became a year older and celebrated the occasion at her home on Mount Tabor. Paul Guinan, Periscope's own Jimmy Olsen,
took snaps and posted them on his site. He shot Colleen's wedding, now a birthday. I'm sure there's a bar mitzvah coming soon.

Sara Ryan and I are going to be guests at the Mid-Ohio Con this coming weekend, November 24-25th. This was the very first con I attended as a pro, and I've probably done it more often than any other. It's extremely well run, and always a pleasure to visit. Stop by my table and as time permits, I'll doodle out a free quickie sketch.

"You can almost always tell an artist what really needs to happen in a scene, and she will have opinions on how that should all go down. And she’ll be taking composition into consideration, and balancing lots of visual elements. Can you do that? It’s not really necessary with a good artist, she’ll do it anyway. But if that isn’t a strength of yours, then don’t impose such notes on our artist. Then you’re just Sam Phillips at Sun Records walking in the recording room and telling Johnny Cash and Carl Perkins how to sing."

Jeff Parker has an essay up on writing for artists: Part One | Part Two 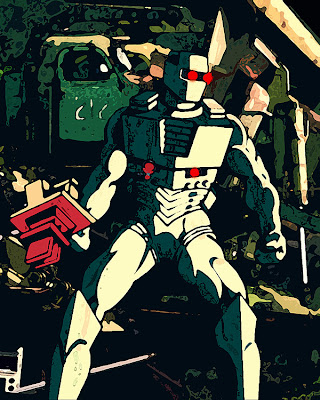 And why am I not hearing much noise about this in the blogosphere? This is a good cause, people. You don't have to draw ROM to participate. You can donate, too:

In other news, our friend Jamie Rich has a reading tonight at Powell's. He'll be reading from his new novel Have You Seen the Horizon Lately?

So while you're wondering whether to go see that Beowulf movie, why not go pick up Ron Randall's Beowulf adaptation for Lerner books: 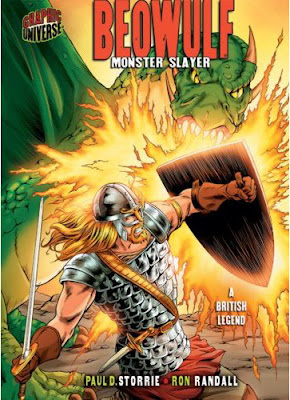 And for those of you who'd like to contribute to the Bill Mantlo benefit,you can click on the button below:

Matthew Clark is illustrating the third issue of The Crime Bible. It stars Batwoman: 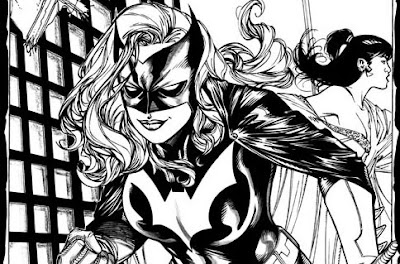 And now Ron Randall weighs in with his ROM for the Bill Mantlo benefit. 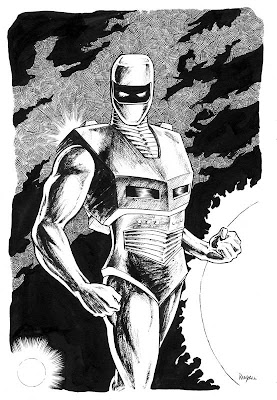 More Roms for the Mantlo family. 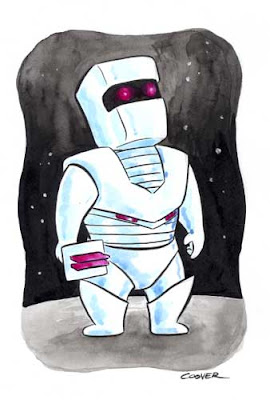 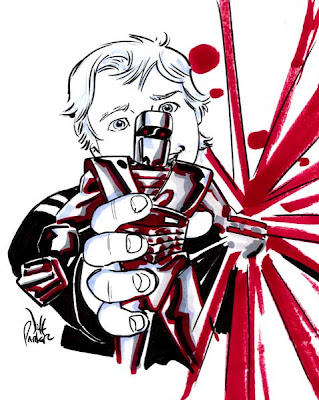 And we've got more Roms by Jonathan Case and Steve Lieber. Find out why so many top cartoonists are drawing Rom:Spaceknight. 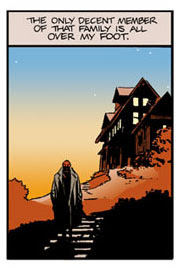 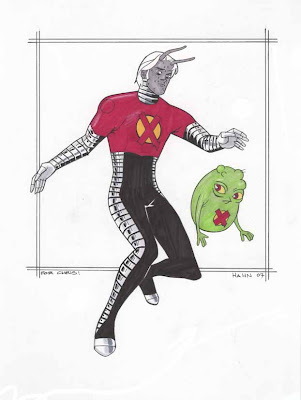 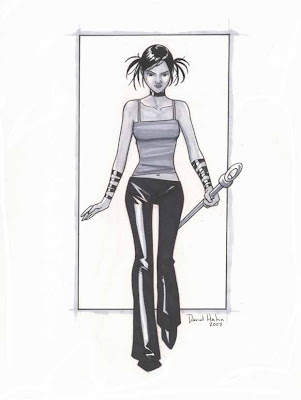 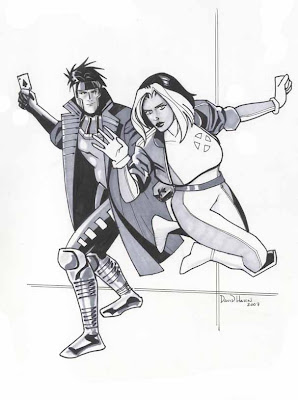 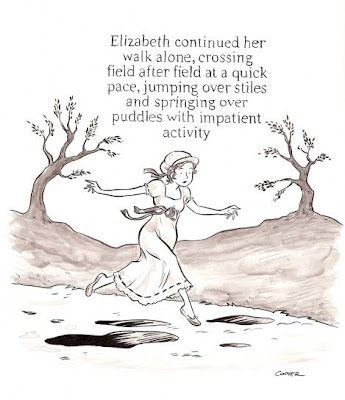 Colleen Coover is the latest contributor to Steven Gettis' awesome collection of sketches of literary figures. 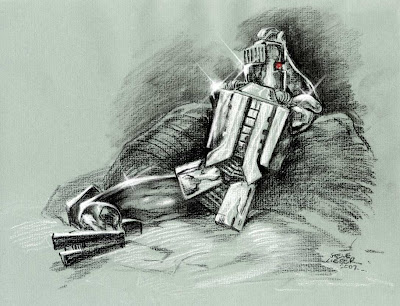 It sucks to follow Jonathan Case's awesome watercolor below, but here's my shot at a piece for the ROM art show to benefit Bill Mantlo. It helped a lot when, of all people, ROM himself showed up for one of our lifedrawing sessions. Everyone was impressed that he could hold a tough pose like that for so long.

David Hahn, here. I get to dip my toes into Spidey's pool one more time in Spider-Man Family #6, due out Dec 12. The ten page story was written by Tom Beland (True Story, Swear to God), and penciled, inked, and colored by me. And Spidey does appear right-side up on some of the pages. 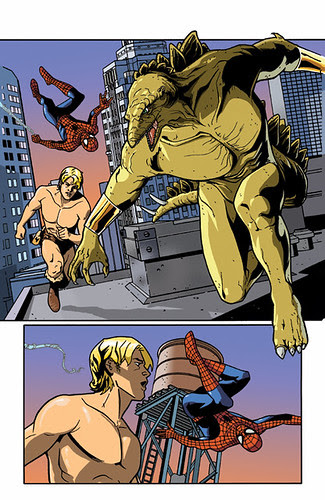 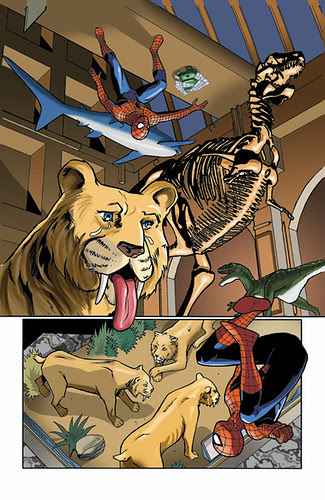 After 2+ years of working in black and white, it feels fab to get back to some color.

This is one of the pieces that will represent Periscope at Floating World's benefit for Bill Mantlo, writer for Marvel's old ROM Space Knight series. The show opens December 6th... Mark those calendars. It's a worthy cause, and I hear there will be prints available from many comics artists, local and otherwise, and maybe some originals for sale as well.

Lieber and Wolk in Baton Rouge.

I'll be at the Louisiana Book Festival this weekend talking with Douglas Wolk, author of Reading Comics.

Here's Douglas reviewing the first issue of Crime Bible (published by DC Comics, written by Greg Rucka, illustrated by Tom Mandrake) at the Savage Critics review site. This comic gets an extra plug here because it's written by my bud and frequent collaborator Greg, who is very proud of the work, and because it opens with an (I think) uncredited engraving, ostensibly by an unnamed 19th century illustrator. 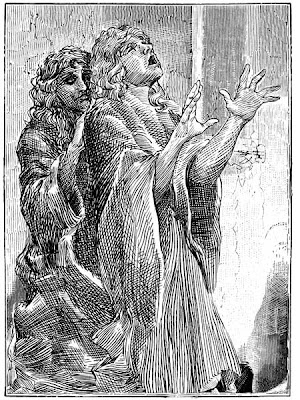