Looks like the news about the Whiteout movie has gone public:

In the unsure world of moving comics to the screen, Greg Rucka and Steve Lieber’s Whiteout appears to have taken a large and definitive one, as Production Weekly has confirmed rumors that Kate Beckinsale will play US Marshal Carrie Stetko in the film version of the story, with Dominic (Gone in 60 Seconds) Sena directing.

Filming is slated to begin the first week in March in Montreal (presumably on sets) and Manitoba (presumably exteriors). Erich and Jon Hoeber wrote the screenplay adaptation of the story. For those unfamiliar with it, the comic, Rucka’s first major foray into comics, followed Stetko as she must solve the first murder on the Antarctic ice. Stetko is in a race against time to find and apprehend the killer before he leaves for the winter, or be trapped with him for six months.

There are a lot of blogs and message boards talking about it. I think my favorite is this one: "British lass Kate Beckinsale is currently in negotiations to star in the Alaska thriller “Whiteout”, based on a graphic novel (i.e. comic book). Written by Erich and Jon Hoeber and drawn by Gerg Rucka." You go, Gerg!

To answer the question I've received in email a couple dozen times this morning, I'm just plain excited. This is a window on a new world for me, and I really hope that comics retailers and booksellers can use this to build a new audience for the Whiteout books and for Greg's wonderful Queen and Country collections. That said, my #1 goal today is the same as it was yesterday: sit my ass down and get some work done. These things don't draw themselves.

Castle Waiting has its roots in classic fairy tales (Sleeping Beauty shapes the beginning of the story) but the completely original cast of characters drives this book into new and very creative territory. You get bearded nuns, a horse knight, poltersprites, a green baby, an Opinicus, and plenty of other odd and amusing characters, but it’s the depth and complexity of the main characters that is so appealing.

Linda Medley's Castle Waiting reviewed at Newsarama on the heels of being named one of the American Library Association’s 2007 Top Ten Great Graphic Novels for Teens.

"I think the rest of the country really doesn't know where Oregon is, they don't know what Portland is. They've got this vague idea and if you ask them to put it on the map, they don't even know Oregon's at the coast."

"Cartooning isn't about drawing well, it's about telling a story. We all tell stories (such as anecdotes about things that happened to us, or to people we know); this lesson is about learning to do that with pictures, even the simplest pictures. Later we'll learn drawing techniques, which will help our stories look better, but we'll begin with the more important task of learning to tell stories. A well-told story will hold the reader's attention even if the art isn't great. None of the instruction below requires any special drawing skill to implement."

Jesse Hamm teaches the craft at his livejournal.

Nostalgia for vanished integrity time! Oni's just announced that there'll be a new edition of WHITEOUT. This might be the new cover.

And this just in: big congrats to Colleen Coover and Paul "Root Nibot" Tobin for making the Great Graphic Novels for Teens list at the American Library Association!

And speaking of Parker, it looks like most of the comics blogosphere is doing just that:

Here's a nice piece about Portland's own Alex Cahill.

Saturday saw the first meeting of the Portland Drink and Draw: Sketches and info.

Saturday also boasted a reading/signing/party for Aron Nels Steinke's Xeric-award-winning comic Big Plans at Guapo Comics and Books I haven't seen any report or photos yet, but if someone sends me a link, I'll post it here.

EDIT: Big Congratulations for Gene Yang! I just heard that American Born Chinese is the first GN to win the Printz Award!

Ouch! Cecil Castellucci is great at everything she tries, and that's a lot: She's a novelist, musician, film-maker and now, with the MINX line, a comics writer. She's game to try anything, including ice hockey: 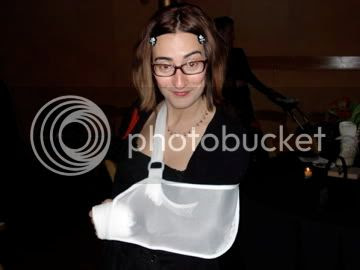 The rest of the story is at her blog

Colleen Coover reports that there'll be a Portland signing for the Fantagraphics Beasts! book. Bwana Spoons will be hosting the event at the Grass Hut store on Burnside Friday,
February 2nd, 6pm-9pm. She says "Don't be shy-- it'll be fun. I think I'll be
able to make that one and would love to meet all ye kind folks that I
can in person."

Over at Comic Book Resources, there's an interview with Jim Demonakos that looks at his wild success with the Emerald City Comicon in Seattle. Here's part of Jim's secret that the piece doesn't discuss: The man has got his shit together. We at Mercury love the show because it manages to be both fun and super-professional. Look for us there this Spring.

Elsewhere at CBR they're profiling the Marvel Adventures line, with lots of great quotes from Zeb Wells, Fred van Lente, and our own Jeff Parker, who notes: "I think as we make more comics with general appeal and less dependence on continuity, we'll keep wiggling back into the distribution system that spurned us long ago." Part 1, Part 2

Three links of interest to the Portland comics scene:

On the TCJ board, Steve Lafler writes: "I'll be in NYC on The Joey Reynolds Show late Tuesday night (actually early Wednesday a.m.) at 2 a.m. on WOR Radio 710.
Mr. Reynolds claims to be the "Seinfeld of Radio" and bills himself as "The Leader of the Royal Order of Night People". It will only be 11:00 p.m. west coast time, so presumably I'll be awake enough to be cogent. I'll be talking about my "40 Hour Man" book, as well as earlier stuff."

The Portland Drink and Draw kicks off on Saturday, January 20th at the Rose and Thistle, at 2314 NE Broadway, at 7:00PM. Details at the link.

And finally, Jesse Reklaw, Nate Beatty, Greg Beans and Sarah Oleksyk have started Comixlist, a list for Portland comics events. Bookmark it, because it's your only hope of keeping track of what's going on in the most lively comics scene in North America.

Today's quote: "First I was asked to establish more credentials, and it wasn’t even innocently phrased anymore. One guy said, word for word, 'If you really like Batman, name three Robins.'”
From the blog "Adventures in Lame," a woman tells the story of being challenged to prove her geek cred and explains why she's not dating a nerd."

Someone at scans_daily did a hilarious job of vandalizing my last issue of Civil War Frontline.

Colleen Coover is interviewed in the latest issue of DRAW magazine. Colleen hasn't seen the issue yet, and she doesn't remember what she said except that it was about working and comics and stuff. And she sent them some art. Parker's seen the issue. maybe he'll remember what's in there.

"I guess that means she hasn't gone sailing off any bridges yet."
Vaneta Rogers interviews David Hahn at Newsarama.

"I recognize this hardcover as a shameless attempt at scamming more money from the faithful, but I am helpless to resist."
Newsarama reacts to the announcement of a deluxe hardcover edition of Agents of Atlas.

Not neccesarily funny, but fascinating nontheless: Wu-tang/Peanuts mashup Thanks Monty!

"...the trick of writing a comic book is to describe a picture. having described it, describe the next one. That is the absolutely essential technique that the writer needs to learn. Some do thumbnails, which is a way of keeping the mind on the fact that a picture must be the end result of the writing."

-Eddie Campbell, in the comments to this blog post.

Attention Rich! Here's your thought for the day: "The odd thing about the claim that eating sugar makes people hyperactive or even violent is that eating any carbohydrate will reliably do just the opposite. Carbohydrates raise the level of the amino acid tryptophan in the bloodstream, which the brain uses to synthesize serotonin, a neurotransmitter associated with sleep, analgesia, calm, and even the lifting of depression. This is the best-documented (and perhaps the only) example that scientists have discovered of the way a food can change the functioning of our brains. Twinkies make us glad."
-Jeffrey Steingarten, from "Murder, My Sweet", an essay in THE MAN WHO ATE EVERYTHING.

Howard Chaykin, David Hahn's collaborator on Bite Club, and The Amazing Adventures of the Escapist, was interviewed for wordbaloon.com's podcast series. It's a fine interview, and early on, Chaykin declares David to be "...one of these guys who should be a world class figure, an astonishing figure. I love David Hahn's stuff. He's one of my heroes."

Jeff Parker's all-Modok issue of Marvel Adventures The Avengers is under discussion at NEWSARAMA. Does "all-ages" mean the same as "kiddie?" Watch in astonishment as the matter is hashed out with unrelenting forensic brutality. (And btw, as far as I know, that Mercury isn't this Mercury.)

People are noticing how great a job Matthew Clark did illustrating Superman/Batman #31. Here's The Superman Homepage weighing in.